Engaging Your Faculty in Activity Reporting with UC-Merced 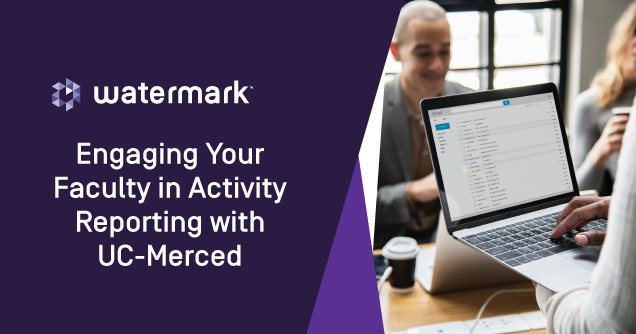 When Mubeena Salaam joined the University of California at Merced to administer Digital Measures by Watermark, she identified faculty engagement as a strategic priority. Salaam recently shared her efforts to drive faculty adoption—and enthusiasm—by rolling out a new feature to address one of the biggest pain points for faculty.

UC-Merced is the first new American research university established in the 21st century, with a mission of research, teaching and public service. The newest campus in the University of California system, it began offering undergraduate classes in 2005. In just 11 years of operation, UC-Merced has earned a spot in the US News & World Report ranking of national universities, and is the youngest “doctoral-granting university with higher research activity” in the Carnegie Classification of Institutions of Higher Education.

“My first order of business as a new administrator was to prioritize the pain points and tackle one that could be quickly resolved and make a significant impact on the mindset of the faculty,” Salaam said. She learned that data entry was a critical concern for Digital Measures users. She also discovered that the “Import Items” feature hadn’t yet been implemented. This feature allows faculty to import publication citations directly from publication repositories rather than manually keying each publication into the system.

Salaam believed that making data entry easier would significantly impact faculty because they enter publication information so often. A successful rollout of the “Import Items” feature would build enthusiasm for Digital Measures among faculty, renew confidence in the system, and build the credibility of her team by demonstrating responsiveness to faculty feedback.

The most important and time-consuming phase of the project included a feature study, extensive testing, and meticulous planning. After thorough research in the Digital Measures Resource Center, our knowledge base and user community forum, Salaam consulted Client Success Manager Stacy Becker and Project Manager Brett Bernsteen regarding capabilities of the feature, implementing a Beta environment and establishing an implementation timeline. She also connected with Jeff Adachi and Peter Underwood of University of California Irvine, a peer institution which had already launched the feature, to learn from their implementation experience.

UC-Merced’s team did significant beta testing, pulling publications from Google Scholar to discover which data came through, which fields weren’t populating, surfacing the system’s current limitations and documenting everything. The findings she shared with the DM team allowed us to make changes to UC-Merced’s custom screens to ensure the cleanest possible data imports, Stacy noted.

With these steps complete, Salaam and her team prepared a proposal for the university’s vice provost, who was asked to champion the rollout. The proposal included a description of all aspects of the new feature and all the steps that would be taken to ensure successful rollout, including documentation and training to be offered.

“It’s important to have a champion who is aware of system limitations but also recognizes that what the system can do vastly outweighs its limitations,” Salaam noted.

To quell concerns and gain buy-in, Salaam’s team gave school-level administrators access to the beta environment. These teams worked with the “Import Items” feature and came back with suggestions that were implemented prior to rollout, including on-screen instructions, since users don’t always refer to training materials while using Digital Measures.

This collaboration removed fear of the unknown and made each school’s administrators an important part of the rollout process, which was crucial, as their support was necessary for successful implementation.

Announce With Authority—and a Roadmap

In order to emphasize university support of Digital Measures, Salaam’s team drafted a message on behalf of the vice provost, who then announced the upcoming rollout. The message directed questions about the rollout to Salaam’s team and alerted faculty to watch for emails about walk-in training sessions.

Salaam’s team used the walk-in training sessions to demonstrate the new feature, but used 10 minutes at the end of the session to share the roadmap for future Digital Measures feature implementations. Talking with faculty about current concerns and future fixes built credibility for the university’s Digital Measures administration teams and demonstrated responsiveness to faculty concerns.

“Mubeena’s technical skill is impressive, but even more important to the project’s success was her vision for the system going forward,” Brett said. Salaam’s team provided as much information as possible throughout the rollout to ensure success, including a comprehensive user guide for faculty. “Her implementation process was best practices level, ” he said.