Welcome back for the third installment of this four-part series that explores the journey of adopting new technology for the collection of assessment data on student achievement in the Division of Online and Professional Studies (OPS) at California Baptist University (CBU).

In Part 1 on automating assessment, we examined our initial steps of 1) Developing a sense of urgency around the need for change and 2) Forming a powerful coalition along the way. In Part 2 on envisioning change, we walked through our next steps of 3) Creating a vision for change and 4) Communicating the newly-formed vision.

We’ll continue our journey now in Part 3 on paving the way for change with steps 5) Removing obstacles and 6) Creating short-term wins.

We knew that clearly identifying the leaders who would be assisting in the change delivery was paramount to our ability to successfully pave the way for change while automating our assessment within OPS at CBU. As the Associate Vice President of Academics for our division (Dirk) and Dean of Assessment and Accreditation (Kathryn), we became obvious players on the team.

However, we recognized that a supporting role—who was not an administrator and could liaise between administration and faculty while assisting with data creation in Taskstream—was key to providing a smooth transition to the change. So, the Academic Support Coordinator position was born! We were fortunate to hire a qualified individual, Jeff, who had years of experience working with the OPS team and knew our degree programs inside and out.

Kathryn and Jeff trained with Taskstream to learn the art of creating templates for each degree program, aligning courses to each degree, and creating more than 400 rubrics that serve as the gateway to collecting assessment data. As we mentioned in an earlier blog, the two worked arduously during the summer of 2016 to prepare for the roll-out of Taskstream in the fall.

Since effective assessment is a foundational expectation for all OPS faculty, we took every opportunity in faculty meetings to publicly praise the individuals who began using Taskstream for assessment purposes for the first time in the fall of 2016. At the same time, we identified the change resistors and took time to have personal conversations to discuss their concerns, re-emphasize our mission, and explain how our previous manual assessment data collection process no longer met our growing needs.

To pilot Taskstream in the summer of 2016, we decided to choose a target absent of change critics… and we thought we did just that. We selected our first doctoral degree program which had begun the previous spring with two cohorts taught by three professors. Another misstep on our part! The resulting sample size was too homogeneous and had limited representation of both our degree offerings and our student population at large. Take two!

We should have analyzed both the pros and cons of choosing a brand-new program with a limited number of faculty to pilot during the summer. It was too easy and everything went smoothly. We learned so much more after the initial fall session.

To set the stage for some immediate wins among all faculty teaching in the fall of 2016, we launched full-scale communication training that took into consideration the different ways and rates people learn. This included the creation of short videos to help faculty visualize the process and follow steps, along with training manuals that included screenshots and guided directions for both students and faculty involved in assessing through Taskstream. Kathryn and Jeff offered one-on-one tutoring to both students and faculty to set everyone up for a successful launch.

Justifying investments in each project, we knew we were utilizing the latest technologies in distance education through faculty who are committed to student’s academic, professional, and spiritual success.

We continued throughout the fall of 2016 to remind all faculty that we were collecting reliable and valid data that would ultimately benefit the students we serve. A short-term win was created as we completed a successful semester of using Taskstream to collect assessment data that we recognized would carry us through to a brand-new year.

Stay tuned for the fourth and final part of this series, where we’ll walk through the final steps: 7) Building on change and 8) Anchoring changes in the culture. 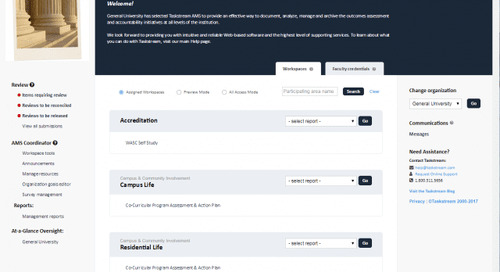 A Fresh New Look for AMS 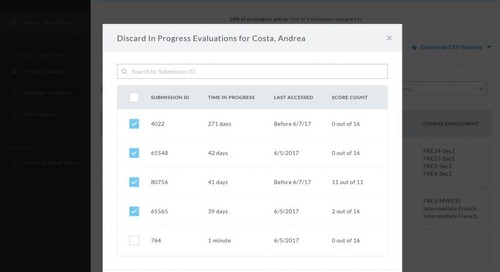 Today, we’re happy to share the latest Aqua enhancements that will optimize your scoring workflows and make...

Related Posts in the Stream 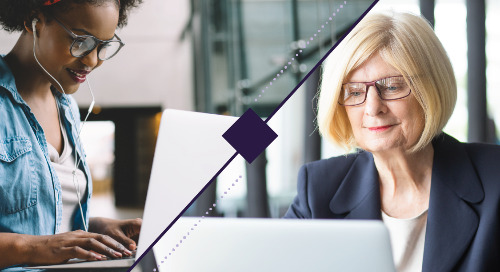 5 Ways a Survey Solution Connects You With Students & Each Other

Open lines of communication on campus are vital, but take on additional importance during times of change or disruption. An integrated course evaluation and survey solution keeps your campus connected Though we often think of them supplementing in-person instruction, ePortfolios provide important opportunities to ensure that the distance learning experience is just as rich and powerful. Top 5 Reasons to Use Digital Tools for Key Campus Processes

Today more than ever, higher education institutions are exploring digital tools for key campus processes, and for very good reason. If you’ve ever tried to reconcile data from two different... The Commission on Colleges of the Southern Association of Colleges and Schools (SACSCOC) process of accreditation and reaffirmation is a heavy lift for those on campus preparing self-study... 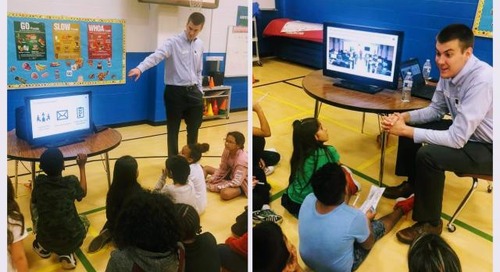 Sharing Watermark’s project management principles with the next generation of leaders There is something magical about the pure jubilation children express, waving their hands in the air to answer... The Middle States Commission on Higher Education (MSCHE) accreditation is a rigorous process for those on campus preparing materials, and for the peer reviewers who review them, visit campus, and... 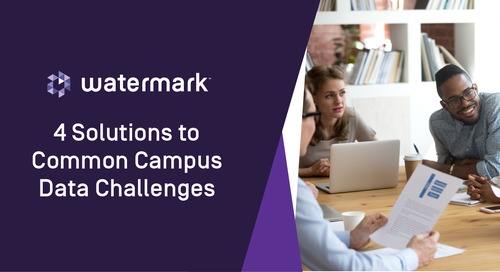 Higher education is awash in data from a multitude of systems. The new challenge for institutions is bringing that data together to inform decisions, ensure institutional effectiveness, and... How Emerging Technology Can Help You Fulfill the Promise of Assessment

Universities dedicate significant time, talent, and resources to the work of assessment. Most institutions consider assessment an important self-monitoring practice to ensure they are delivering... 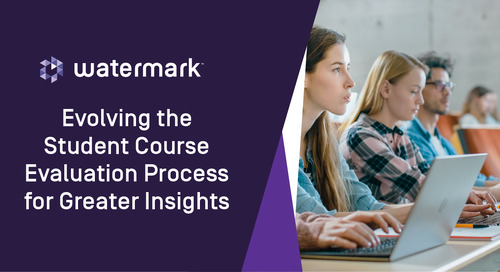 Higher education institutions seek to measure course quality, instructional quality, and learning outcomes. So why does the student course evaluation process rarely include measurement of... If you want to see some innovative assessment work, check in with community colleges. Because of their student population, program structure, and relationship with stakeholders, they have a fresh... From the famous jazz scene on Bourbon Street to the many success stories shared by Watermark’s clients about how they use the company’s solutions to improve their institutions, there was never a...

If you want to see some innovative assessment work, check in with community colleges. Because of their student population, program structure, and relationship with stakeholders, they have a fresh... Higher education institutions are dedicated to supporting student success, and have a sincere interest in demonstrating their institutional effectiveness. In June 2018, EdTech reported that 61... 4 Questions About Syllabi Every Institution Should Ask

Whether you manage your institution’s catalog, work on a curriculum committee, or prepare accreditation reporting, chances are, you bump up against a common challenge: accessing accurate,... 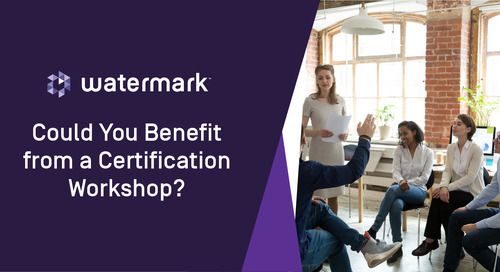 Could You Benefit from a Certification Workshop?

When I noticed the pre-conference workshop to become certified in Taskstream AMS at the 2019 Watermark Engage conference, it gave me pause. I’m always interested in learning new things, but wasn’t... 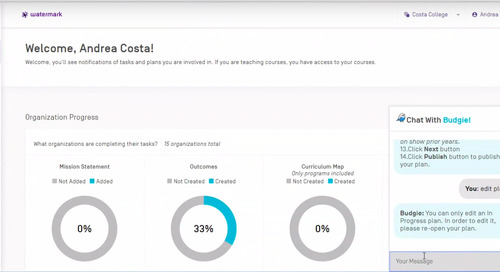 Recently, our Watermark office in Mohali, India held its first hackathon of 2019. With a record 13 teams and more than 50 participants, it was Watermark’s largest hackathon to date. The teams... You know those Oprah episodes where she stands on stage and points to each audience member as she shouts, “You get a new car! And you get a new car!” That’s my dream … sort of. In my dream, I’m... In the twilight hours of a cold spring Friday, employees of the Watermark Milwaukee office rested their keyboards after two days spent diving into projects of their own choosing. Satisfied at the... 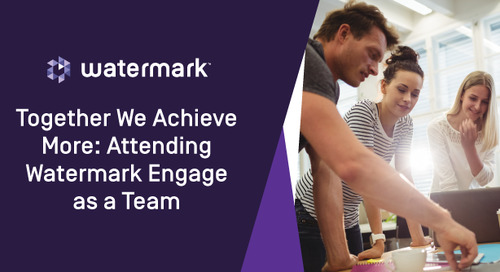 Together We Achieve More: Attending Watermark Engage as a Team

I have attended Watermark assessment conferences several times starting a decade ago when I was a new faculty member helping to coordinate the assessment system with LiveText. Those conferences... 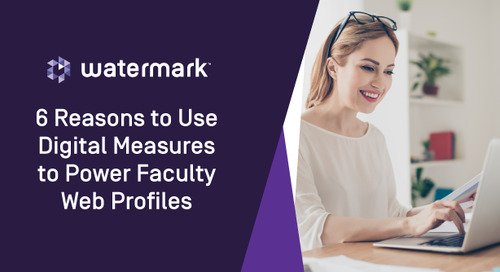 6 Reasons to Use Digital Measures to Power Faculty Web Profiles

People visit your website looking for information. Maybe they’re deciding whether or not to attend your institution, or join your faculty or staff, or donate to your capital campaign....

Read Blog
Back to Stream
× Streams